That first patient we got in our country?  We did everything right.  We were so proud.  Yet with hindsight, we along with everyone else squandered the next month that we could have spent preparing. If only we had better leadership.  (Trump:  “The 15 within a couple of days is going to be down to close to zero, that’s a pretty good job we’ve done.”)

Country after country, state after state, we somehow thought it wasn’t going to come to us.  We were different.  The Chinese government’s early “crazy” actions of shutting down whole regions should have made it clear that we should take this very seriously.

The Italians pleaded with us to get ready.  And then we even started to plead with our fellow Americans back East.  Almost always on deaf ears, time and again.  Amazing thing, human nature … sometimes in such a bad way.  (I wouldn’t be surprised if there are STILL cruise ships sailing out there, those tax-evading petri-dish bastards, who have probably already pocketed away illegal bail out money from us….)

Everyone initially was scared when our surge/first wave started rolling in.  Seniors were most susceptible, as the Grim-fucking-Reaper went into nursing homes like a fox into a hen house.  But this was an unknown disease; there were plenty of stories of younger people getting this and dying for completely unknown reasons.  Doctors around the world were desperately pumping out info.  Case series that would’ve been turned away by the lowliest pharmaceutical company’s shit-rag were suddenly being published by the highest Impact-Score establishments:  NEJM, The Lancet, etc….   Everyone was racing to give or get whatever pieces of data they could possibly share with their colleagues around the world.  There was no time here to sip coffee and carefully plan out a 3-year multi-center, randomized, double-blinded, placebo-controlled, well-powered and unbiased trial that went through the IRBs and the countless circle-jerk meetings between the universities and the NIH etc etc etc – there was just no time for all that bullshit.

It got freaky fast.  The parking lots emptied at the hospitals.  The testing tents popped up in the empty spaces like lunar stations or jumping castles.  Field hospitals were getting built.  There were no visitors or families milling about anymore.  Everyone in the hospitals stayed away from the cafeteria and the elevators and each other, and rightly tried to steer clear of the patients suspected to have (the “PUI”s) or known to have (the positively tested) the virus.  (Oh, and by the way, a “known to have” was not a very common reality, since that would imply a positive test, and most hospitals’ testing ability was initially a shit-show.)  And, of course, PPE was often scarce.  So, masks were being used in ways that they were not intended — keep re-using this one-time-use mask, just put in a brown paper bag and it’ll be fine!  And you were frowned upon if you wanted to protect yourself in the standard way.  Why were you special, after all?  Get in there and risk your life and your family’s lives and the rest of your non-Covid-19 patients’ lives that you’ll see later today.  Hey – it doesn’t aerosolize – we’re sure of it!  Now get in there with just that standard surgical mask that you’ve worn all day….

And yet they came.  …  Somehow or other they came, just the same!

The 7 PM clapping started, signs thanking the healthcare workers sprouted up in yards and in windows by the hospitals.  Church members — who couldn’t attend their Sunday services – instead circled the hospitals (6-feet apart!) with thank-you signs.  Children, stuck at home, flooded the hospitals with crafty thank-you cards.  But I also know a truth.

I know the real front-line heroes.  Of the doctors, it is a minority of them.  Firstly — they were the ones in the hospitals, not generally the outpatient docs.  And of hospital docs, it was mainly the ER docs, the ICU docs, the Anesthesiologists, and the Internists admitting all the non-ICU Covid-19 patients.  These docs are amazing.  All the rest of the hospital docs, then, might see one or two Covid-19 patients on a consult or something.

So except for the above docs, and some others below, the REAL heroes of this pandemic are the hospital’s nurses.  They are the ones that had to be in those rooms most of the goddamn day, turning the patient, helping them eat, giving meds, drawing blood, adjusting the blood pressure cuff or the BiPAP or vent, or firming up the restraints so the delirious patients wouldn’t try to self-extubate-themselves-and-die for the 10th freaking time that shift.  Change the bedpans, bring in the trays from the cafeteria….

Even fight with the sanitation staff here and there, who were asking if the nurses might clean the Covid-19 rooms after the patients died, since you know, they were in there already….   And always working in suffocating PPE….   On and on, all day, every day, and often without PPE the way it was designed to be used.

And alongside these truly courageous folks — who deserve every dime of a “Healthcare GI Bill” that has been proposed — and who we’ve all heard understandably and rightfully either talk back or quit again and again during this crisis, alongside them are the other truly “essential” staff who have to go into these rooms on a regular basis.  People like the respiratory techs managing the vents and respiratory treatments.  X-ray techs coming in for the bedside chest X-rays.  Also — all the EMS first-responders in the community.  (I never understood the EMS guys in the streets who take part in clapping at 7 PM.  Y’all are clapping for yourselves, buddies!  You’re heroes more than most!)  All those who initially receive the patients in the ER, working fatigued in their used PPE, swimming within some invisible cloud of goodness-only-knows-how-enormous a potential viral load.  These and other jobs are not as glorious as capital-P-Physician, and surely not as well paid, but if you want to find your heroes (“find the helpers”, and all…), if you want to find the truly courageous people to thank – and thank with your dollars in the form of a “Healthcare GI Bill” or hazard pay or something similar – then thank your local hospital’s nurses. 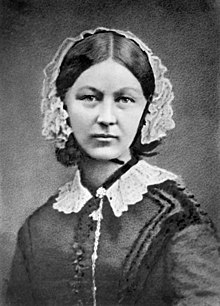 In honor of the 200th birthday of Florence Nightingale (Godmother of Souls) this May 12, thank your freaking nurses with all you got.

And if you want to help still more, advocate personally, via mail, with neighbors, whatever, that they STILL don’t have the adequate testing or the PPE that they should have, and we will likely have a big wave this winter teamed-up with the flu.